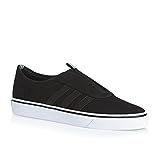 Standard Adidas shoes have been worn by skateboarders for decades. Even before manufacturing footwear designed specifically for skateboarding, Mark Gonzales had been endorsed by the brand before their official move into the market began. Models like the Superstar became popular with skateboarders in the late 1980s/early 1990s due to their flat soles and protective rubber toe area able withstand the punishment of countless fliptricks. Adidas honoured this era in 2016 with their â€˜Respect Your Rootsâ€TM capsule, featuring commemorative Superstar colourways picked by legendary 90s pros Kareem Campbell, Drake Jones and Joey Bast. The current pro team includes Mark Gonzales, Dennis Busenitz, Silas Baxter-Neal, Lucas Puig, Mark Suciu who all have signature model shoes with a great deal of input from these riders. Other team members include Nestor Judkins, Jake Donnelly, UK connections Benny Fairfax and Chewy Cannon, Brazilian ledge-tech beast Rodrigo TX and many more. The team is ever expanding with a focus on the European side of things, sponsoring Sants hero Raul Navarro and Gustav Tonneson amongst others. In 2009, adidas produced Diagonal, a skateboarding film directed by Torsten Frank which placed an entire focus on their European riders. Soon after the videoâ€TMs release Dennis Busenitz would become part of the international team and also receive a pro-model shoe which continues to a favourite adidas skateboarding shoe by many. 2015 saw the release of Away Days – adidasâ€TM first full length skateboarding video directed by Matt Irving, filmed by Chris Mulhern, Justin Albert and again Torsten Frank returning. Featuring footage of the whole team, full parts from Puig, Suciu, Baxter-Neal and Busenitz, Supreme youth Tyshawn Jones and Na-Kel Smith and many more. Away Days also included the surprise and controversial welcoming of tech master Daewon Song and Marc Johnson to the team. From straight to the point models such as the Adi-Ease and Campus to the